This is the phenomenal Phoebe Robinson This is the mask Phoebe made for The Red Queen This is what the mask looked like before Phoebe began to weave her magic. Phoebe on making her mask

“These are some of the images in my process.

“When creating a work I am quite explorative in a range of mediums and materials in different forms.

“I create as I work, sometimes producing a piece from a half formed image in my mind that can only be resolved through the act of creating it. The mask for The Red Queen was to tied into the fantastical elements of the Obernewtyn world, whilst maintaining a traditionally styled masquerade aesthetic. “I have only recently begun to expand on my personal practise. I am still experimenting with many artistic styles however within the past two years. I have produced installations, a series of illustrations and card designs and I am currently in the process of preparing for my end of year exhibition at the Queensland Academy for Creative Industries, exploring the fragility of human nature – its qualities of instability and those of simple beauty.” Phoebe is not a children’s book illustrator, but she is the second of the young talents I have always liked to feature whenever I have a project unfolding. Phoebe is a year 12 student at the Queensland Academy of Creative industries (QACI) in Brisbane.  A talented dancer and actress, she is also a maker of art. Seeing the line of very cute cards she produces, and in need of a special mask that could be snatched from me and used as the primary prop by a company of dancers who had choreographed an amazing ballet for the Masked Ball, by special request of the choreographer, Sherree Nash, I asked Phoebe if she would decorate a mask for me. I felt that being a dancer and actress and an artist she would be able to produce a piece that was both beautiful and robust enough to survive two athletic and substantial performances.

The rest fulfilled all of my hopes and then some and I have no doubt we will see more of Phoebe and her art in the years to come.

Below, Phoebe is on the left, performing a dance she and Natasha Rowe choreographed and performed while Adelaidethegirl sang Starve the Sea from her Dreamscape collection. All three girls were flown down to Victoria for the event at their parent’s expense, knowing the occasion was unsponsored and that we were using it to raise funds. Now all that remains is for you to scroll down through the taster gallery of Phoebe’s work, follow the links if you would like to see more, and then bid on the mask I wore as the Red Queen, and which was the central focus of the magnificent mask ballet performed at the Masked Ball. Remember if your bid is highest, not a cent will go to Phoebe or me or to any administration. It will all go to the special charity fund. You will receive this dazzling mask as a keepsake of the Masked Ball and the end of the long road of creation that resulted in the Red Queen, and a copy of Obernewtyn and The Farseekers in audio book form!

or you can see more of her art on instagram at 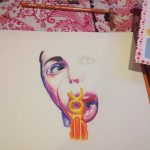 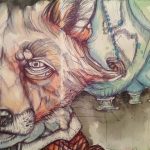 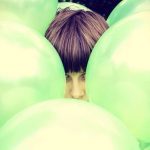 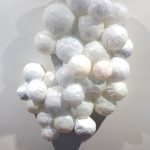 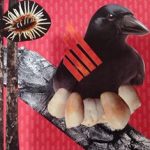 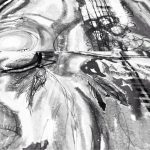 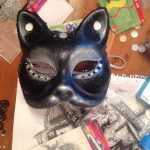