This is the supremely-Talented Shaun Tan This is is the magnificent mask Shaun made. Before Shaun unleashed his talent, the mask looked like this:

Shaun on making the mask.

“I created this mask very intuitively, in the same manner of a series of sculptures I recently completed for a book The Singing Bones, inspired by Grimms’ fairy tales. Since a mask is already a sculptural object, I thought I’d just extend it.

“The result looked very earthy and reminded me of some dark cypress trees near where I live, such that this might be the face of a ‘cypress spirit’ of some sort. “I oil painted the surface with this in mind, including flecks of gold which might suggest something precious or magical. Maybe this is a good or a bad spirit… maybe both?

“My feeling is that it’s one of those characters who offers you great riches at some questionable cost, so much so that you wish you’d never been offered that tantalising opportunity in the first place. “You should have just kept on walking past that big cypress tree on your way home from work.” (all of the painted images age Shaun’s.)

Shaun Tan grew up in the northern suburbs of Perth, Western Australia. In school he was known as the ‘good drawer’ which partly compensated for always being the shortest kid in every class. As a teen, Shaun began drawing and painting images for science fiction and horror stories in small-press magazines. Later, he graduated from the University of WA in 1995 with joint honours in Fine Arts and English Literature, and  and currently works as an artist and author in Melbourne.

I met Shaun first many years ago, at the start of his illustrating career, when he was doing a book for Gary Crew, having been discovered by Helen Chamberlin.  There was no doubt he was something special as an artist, and the fact that he was a man who loved cats, was the final seal of approval for me.

He has since become best known for illustrated books that deal with social, political and historical subjects through surreal, dream-like imagery. The Rabbits, The Red Tree, Tales from Outer Suburbia, Rules of Summer and the acclaimed wordless novel The Arrival have been widely translated and enjoyed by readers of all ages.

Initially, Shaun worked in black and white because the final reproductions would be printed that way. Some black and white mediums he used included pens, inks, acrylics, charcoal, scraperboard, photocopies and linocuts. His current colour works still begin as black and white. He uses a graphite pencil to make sketches on ordinary copy paper. The sketches are then reproduced numerous times with different versions varying with parts added or removed. Sometimes scissors are used for this purpose. The cut and paste collage idea in these early stages often extend to the finished production with many of his illustrations using such materials as glass, metal, cuttings from other books and dead insects.

Shaun describes himself as a slow worker who revises his work many times along the way. He is interested in loss and alienation, and believes that children in particular react well to issues of natural justice. He feels he is “like a translator” of ideas, and is happy and flattered to see his work adapted and interpreted in film and music.

Shaun has also worked as a theatre designer, a concept artist for animated films including Pixar’s WALL-E, and directed the Academy Award-winning short film The Lost Thing with Passion Pictures Australia. In 2011 he received the presitgious Astrid Lindgren Memorial Award, honouring his contribution to international children’s literature. Here is a picture of Shaun at his work desk Here is a picture of shaun getting an

academy award for The Lost Thing.

Now all that remains is for you to scroll down and look at some of his other work, follow the links if you want to see or learn more about Shaun, then make your bid at the bottom of this page.  If at the end of the auction, your bid is highest, the entire amount will go to our two charities and you will receive a precious Shaun Tan Original as a keepsake and as a reminder that ultimately, we are all part of the wild world, so we had better take care of it!

Or tune into his blog here

You can also an article about Shaun, here

or read his marvellous little story of Eric, here 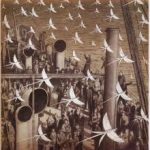 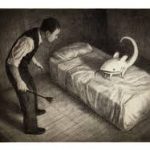 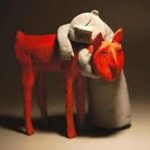 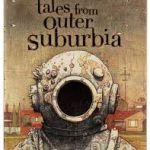